In the Anglican tradition, the sacraments as defined by our Catechism (BCP, page 550) are outward and visible signs of inward and spiritual grace, given by Christ as sure and certain means by which we receive that grace.

XXV. Of the Sacraments.

Sacraments ordained of Christ be not only badges or tokens of Christian men’s profession, but rather they be certain sure witnesses, and effectual signs of grace, and God’s good will towards us, by the which he doth work invisibly in us, and doth not only quicken, but also strengthen and confirm our Faith in him.

There are two Sacraments ordained of Christ our Lord in the Gospel, that is to say, Baptism, and the Supper of the Lord [Eucharist].

Those five commonly called Sacraments, that is to say, Confirmation, Penance, Orders, Matrimony, and extreme Unction, are not to be counted for Sacraments of the Gospel, being such as have grown partly of the corrupt following of the Apostles, partly are states of life allowed in the Scriptures; but yet have not like nature of Sacraments with Baptism, and the Lord’s Supper, for that they have not any visible sign or ceremony ordained of God.

The Sacraments were not ordained of Christ to be gazed upon, or to be carried about, but that we should duly use them. And in such only as worthily receive the same they have a wholesome effect or operation: but they that receive them unworthily purchase to themselves damnation, as Saint Paul saith (BCP, page 707-708). 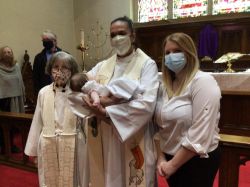 Baptism is a coming into the Body of Christ, in which we become members of one another and of Christ – it is about who we are in Christ, and whose we are: God’s own. In baptism we are gathered… and sent forth, in the ministry that is God’s own ministry of transformation, reconciliation, healing and salvation of the world. So, baptism is not just about identity and belonging, it’s also about being sent in mission and ministry. The baptismal liturgy speaks of the foundation of that mission and ministry:

“Baptism is the sign of new life in Christ. Baptism unites Christ with his people. That union is both individual and corporate. Christians are, it is true, baptized one by one, but to be a Christian is to be part of a new creation which rises from the dark waters of Christ’s death into the dawn of his risen life. Christians are not just baptized individuals; they are a new humanity.As the World Council of Churches document Baptism, Eucharist and Ministry has reminded Christians, the scriptures of the NewTestament and the liturgy of the Church unfold the meaning of baptism in various images (often based on Old Testament water symbols) which express the mystery of salvation. Baptism is participation in Christ’s death and resurrection (Romans 6.3–5; Colossians 2.12); a washing away of sin (1 Corinthians 6.11); a new birth (John 3.5); an enlightenment by Christ (Ephesians 5.14); a reclothing in Christ (Galatians 3.27); a renewal by the Spirit (Titus 3.5); the experience of salvation from the flood (1 Peter 3.20–21); an exodus from bondage (1 Corinthians 10.1–2) and a liberation into a new humanity in which barriers of division, whether of sex or race or social status, are transcended (Galatians 3.27–28; 1 Corinthians 12.13). The images are many but the reality is one. Several dimensions of baptism became clear as the early Church developed its practice. Initiation into the Church was a vital concern of the whole Christian community and not only of the candidates for baptism and their immediate families. Preparation for baptism was a responsibility shared among various members of the community, both ordained and lay. Becoming a Christian had as much to do with learning to live a new lifestyle within the Christian community as it did with specific beliefs. When the day of baptism finally arrived, the event took place within the context of the Sunday eucharist, when the whole community was gathered and where the newly baptized received communion for the first time.

XXVIII (28). Of the Lord’s Supper.
THE Supper of the Lord is not only a sign
of he love that Christians ought to have
among themselves one to another; but rather is
a Sacrament of our Redemption by Christ’s
death: insomuch that to such as rightly, worthily,
and with faith, receive the same, the Bread which
we break is a partaking of the Body of Christ;
and likewise the Cup of Blessing is a partaking
of the Blood of Christ.
Transubstantiation (or the change of the substance of Bread and Wine) in the Supper of the
Lord, cannot be proved by holy Writ; but is
repugnant to the plain words of Scripture,
overthroweth the nature of a Sacrament, and hath
given occasion to many superstitions.
The Body of Christ is given, taken, and eaten,
in the Supper, only after an heavenly and spiritual
manner. And the mean whereby the Body of
Christ is received and eaten in the Supper is Faith.
The Sacrament of the Lord’s Supper was not
by Christ’s ordinance reserved, carried about,
lifted up, or worshipped.